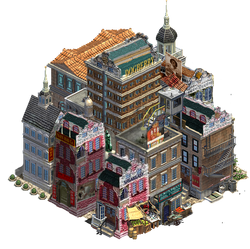 Located on the mainland of the North American continent, and separated from the savages of Asia by the Pacific and the hostility and envy of Europe and Africa by the Atlantic, the United States have much to thank Providence for. Not only do they control a nation of states and dependencies, altogether as strong as France (yet geographically isolated from the same), America is blessed with economic exurberance, while Europe is plagued with existential angst, and Asia is immured in violent strife. But how long can it last? with new wealth and power, there too will be jealousy: sinister forces now stalk the slums, brothels, and corridors of power of Europe, while in Asia there exist the twin evils of Communism and the stark militarism of the Empire of the Rising Sun. Nevertheless, this could merely presage a new and exciting chapter in American history: after all, what is the shining knight in armour without a dragon to slay?

As a newcomer to the global affairs stage, the United States could be a potential winner. With greater migration and an innovative "can-do" spirit which has caught on even with their European cousins, the ability of America to expand through demographics and political influence cannot be underestimated. In battles, the Americans' ability to capture and hold cities means that they are extremely useful at what Age of Darkness is about: conquest.

And what a war machine you have! America not only has a well-diversified military roster, but it also has faster-building aircraft, with an accuracy and range advantage for Mechanisation-level bombers and onward, as well as free and farther-shooting artillery pieces. Equally, the USA also enjoys slashed ramp prices for all unique light and medium vehicles, so that means cheaper artillery and armoured cars for all so long as you have oil. Additionally, the USA specialises in one special area, and that is the taking of cities. Since conquered cities assimilate faster than any other faction, your will thus find it most expedient perhaps to use your superior forces and artillery advantage to take cities. This is only made easier with your relatively larger repertoire of airplanes and tanks in the early game. One of the main benefits of the American faction is that it enjoys a lower cost to creating citizens, which means that when the time comes to repopulate newly claimed territory, the American player can do this at little or no cost.

Which leaves us to ask one question: what's the catch?

Sadly, there is indeed a catch and it's in the quality and ease of research for most US units, especially vehicles. Although the quality of American shipping can't be sniffed at, the same can't be said of most US vehicles, tanks especially. Firstly, tanks and other vehicles don't enjoy any special perks — they don't have the intel-savviness of the Brits, nor do they have the awesome hitting power of the Russian or German tanks. Tanks are also the Achilles heel of the US as well especially in the early game where their research and upgrade costs tend to be astronomical, but over time become the cheapest in the game.

The American player will discover that economics will be a tough field to master, having only the ability to obtain a higher population count at lower the cost — against many European factions and even China and Japan, the US player will discover it has no special resource accumulation abilities; against the Chinese, he suffers again from having a slower albeit cheaper population growth rate.

Thus a major theme in American strategies is choosing either to rush early, or to boom later on, because turtling — unlike Britain, Russia or Poland — simply isn't a viable strategy. For this reason American strategy depends on geography — vast maps like the Outback and Amazon require an aggressive approach, where the US of A uses its initial resources (better artillery and tanks) to seize cities from enemies whereso possible; if there is water, then it can sit back and take a more leisurely approach towards late game booming, using its superior air force to back up its navy on the high seas, whilst gathering resources to build up its land army. The cheaper cost of US artillery and armoured cars should be taken advantage of, as it would also mean that you can deploy many of these units in tandem with a combined-arms approach to warfare. Use quicker-producing aircraft to strafe tanks and anti-aircraft units, so that your weaker tanks and your numerically superior automobile fleet can then close in for the kill.

(note that many of these units are shared with other nations)

Retrieved from "https://interbellum.fandom.com/wiki/United_States_of_America?oldid=13381"
Community content is available under CC-BY-SA unless otherwise noted.