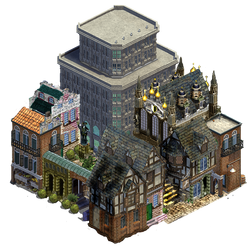 By far and large, Germany is the most vibrant and powerful economy in Central Europe, but it has been down on its luck ever since the Great War ended. An increasingly crowded nation with fewer jobs means that conflict, social disorder and anarchy are much the norm in many German cities these days — inviting interference by the abhorred Jewish plutocrats of America and the other petty nations, while an increasingly restive Russia threatens to spread the contagion of Bolshevism abroad into Europe. Even so, with great adversity comes great opportunity: perhaps, if all undesirables and Communists were neutralised, can the wilderness of Central Europe then be recast as a new Reich? will German glory be renewed for another thousand years, or are the German people doomed to endless night, fog and despair?

The German army is known for one thing: quality at any cost. Thus, all of Germany's units have better hitpoints, armour and firepower, but suffer from having successively high factor costs. The German army is one that is not easily produced, but when properly played can easily rout all other factions to the N-th degree. German armour and aircraft are especially vulnerable to this problem: each age's units are fundamentally better than other factions' own, but also compound in cost.

Still, in all accounts the German army is an ideal component for use on all-land or land-heavy maps such as Australia or the Mediterranean. At sea, however, it is another matter. It is true that the Germans get some of the most powerful units: the Bismarck-class capital ship; the E-Boat; and the Type XXII U-Boat, but while these are powerful units, they are quite expensive, so there is always a danger for Germany that as with land-based systems, its naval units have costs that may slow the Germans down, making them better at defence at sea. One thing that does distinguish them from others, however, is their ability to get out Submarines fairly quickly. All a German player needs to do in the early game is to gather as much Timber, and build as many Anchorages as possible to spawn out the max number of Submarines available, then upgrade them to the Advanced version as quickly as possible whilst using these Submarines for nuisance raids and privateering, targetting the enemy's Merchant Marine and heavier warships, such as Cruisers.

For this reason, Germany, although armed with the best weapon systems, is actually rather weak if the right approaches are used. Powerful it may be, yet the German war machine is heavily dependent on a good economy. If you use a good early rush faction, such as a minor power with early armour capabilty like Poland or even another major power like France or Russia, then hamstringing the German war economy is of importance. Fewer resources means fewer tanks, and a harder ride to obtain Germany's top-tier tanks. Failing that, use your navy to contain Germany, or ensure that you have a numerically superior airforce — again, most major powers, particularly the USA, Britain, Russia and Italy, should be able to muster sufficient airplanes to outnumber if not outgun the Luftwaffe before it can become a serious menace. Because German units are meant to outperform units of a similar capacity, the objective is to never face Germany down with the same kind of units it has (unless you are Russia), but to always ensure that you have the right units to exploit them (ie tank destroyers versus tanks, submarines versus battleships, fighters versus bombers).

Thus a German commander needs to be vigilant over how resources are spent. While the resources of Germany, obtainable through building new structures, will be able to soften the resource blow from creating armies, it will be time that will be extremely important as regards to how this army can be created. Once the initial boom from construction eases off, a player will have to obtain as much resources as possible to keep his or her war machine working at all costs. Allies and trade partners are always important, while the foe must be lured into combat every so often. In all, however, Germany is a very powerful faction if used against factions that do not have good naval supremacy on water maps, or do not have anything that can counter its units from the Mechanisation Era onward.

Retrieved from "https://interbellum.fandom.com/wiki/Germany?oldid=13505"
Community content is available under CC-BY-SA unless otherwise noted.