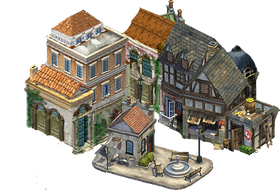 Second in power only to the British Commonwealth, France is a unitary republic that prides itself on being the champion of liberty, equality and fraternity — the very watchwords of its aspirations ever since the 1798 revolution. Yet, its role in the world is increasingly at odds at its lofty aspirations: France is forced to suppress indigenous independence movements in its colonies, even as the fracticious nature of domestic politics threaten to cripple the nation as a whole. Much effort and many sacrifices will have to be made to preserve French freedom, and very soon enough, for global events have taken an ominous turn: with Russia, Germany and Japan on the warpath, can France remain free and sovereign in spite of this impending wave of darkness that threatens all humanity?

Compared to other factions, French units are all-rounders, and are pretty much average: after all, many nations are using French materiel to wage their wars — the heavy presence of French light armour and aircraft in many nations is good proof of this. True, Germany may have better units, but just how many of their units will you get to see on a frequent basis? The abilities to build your first wonder and research your first government instantaneously can be used to France's advantage in picking your new strategy as quickly as possible, while its tank programme has very low technological overhead costs, meaning that France can obtain its best 4 units: the AMR35 scout tank, the R35 light tank, the S35 SOMUA and the Char B2 rather quickly. Coupled with sufficient support with infantry, artillery and air power and you can easily begin an early blitz against your foes.

The only danger that France faces, however, is its lack of variety: its units can't really distinguish themselves, and while its tanks are the "standard" in the game, build too few of them and you will see the Germans bore holes into you, the British outperform you and the Russians simply steamroller over you. In a skirmish game, the best thing you might have to do would be to do all your fighting early, destroying your opponents' industrial power by disrupting their economy and then settle in for the long run. Because France usually tends to have the tank advantage earlier than anyone else, an early game tank rush with bombers to destroy enemy infrastructure and disrupt formations is always the best way forward. The only issue here is how to get there, because of the nature of France's economic perks — which involve allowing infantry to run free range to scrap resources together. This is a big problem, because France just doesn't have a good reason to train infantry, other than working as a highly defensive task force. Moreover, the French are also bereft of anti-tank infantry units, such as heavy rifles and recoilless gun infantry, so they are at a very big disadvantage in the late game, especially against Russia and Germany who have the lion's share of units.

So the way to use France is to not repeat the same mistakes as the French in real life. Keep your infantry back guarding your cities, but use your powerful early game tank corps (which is the most modern in the beginning) to smash your opponents. In defensive games, especially on water maps, diplomacy is a must. Strike alliances with factions whose units complement yours — almost any faction will do, but the most vital are Russia (which has oil), Poland (which has a powerful food gathering bonus and good early antitank capabilities), as well as Britain (who has the best economic bonuses in the game and a strong naval perk). When attacking, use air superiority and your powerful early-game tanks to take the fight to the enemy, before he can ever think of attacking you.

France is the only major faction to receive "allegiance" weaponry:

Researching Militarism imposes Vichyist rule on France, granting access to Marder and Franc-Garde "peasant levy", which should have special abilities.

Once a relationship is established with the allies, the French will immediately obtain access to some mostly late-game materials, most notably Spitfires and Blenheim attack bombers from Britain, as well as American Quadmont supply truck/AA halftracks, Sherman and Firefly tanks.

Bizarrely, Arab light infantry are available to France regardless what allegiance was chosen, although these units are not available to Spain unless Militarism was chosen.

Note: Panhard is quite tough, and has good armour, but can't attack while moving. However, it has an attack bonus against armored cars.

Retrieved from "https://interbellum.fandom.com/wiki/France?oldid=13959"
Community content is available under CC-BY-SA unless otherwise noted.