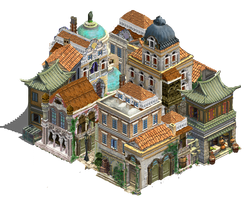 For the first time in so many centuries since the barbarian Mongols, the Land of the Rising Sun is once more threatened with darkness. All around Japan and Asia, the white devils are striking bargains to desecrate Amaterasu's sacred islands and plotting schemes to place stumbling blocks in the way of Her people. Japan's rivals are indeed thus many, but their time shall come - Russia is too engrossed with flea-infested and impoverished Europe; Britain and France are at war with their own subject-colonies; and American affluence has resulted in decadence and self-doubt. Perhaps Asia will be obliged to accept a new master capable of showing the world what Asia is truly capable of?

The Japanese faction is classified by three factors: defence, economy, and navy. With towers and forts enjoying a boost in their tactical capabilities, and the ability to spawn fishing ships from your harbour once erected, Japan can work towards becoming a powerful sea power, protected on land by powerful fortresses, which is something that one should take into account. Japanese sea power is also further enhanced by its possession of the Yamato-class super battleship, a slow-moving but hardy warship, capable of taking immense amounts of punishment in battle — and repaying it all back in kind. Japan's air force and naval units are also sufficiently powerful to give other players' pause early on. Japanese battleships are often slower but have better range, while Japanese aircraft early on are very fast well until the Electronics Era.

On land, however, it is another story. In contrast with the immense firepower and armour of the Yamato, Japanese tanks and other vehicles however suffer from having low hitpoints and armour ratings. Even so two traits are to be noted: many of their units have high rates of fire and suffer no minimum range penalties, a trait which is shared by almost all of its units to make up for their poor durability. If the Japanese player can gain numerical superiority, its units can emit a witherhing hail of fire which can even reduce the almighty German and Russian tanks to charred steel in minutes — and men and horses into a red mist. However, if faced against the appropriate counters, ie tanks to foil infantry, AA guns to counter aircraft, etc, the Japanese war machine can grind to a halt if not be wholly annihilated. So always be wary — even factions like China can eventually bring out Shermans and other units to catch you unawares if you are not prepared.

The second is that Japan's armoured vehicles tech tree, like Italy's, is conducive to early game aggression. Because many of the factions need to wait to get proper vehicles, and most factions' vehicles are normally on par with one another well until the later stage, you should always endeavour to strike a decisive blow before the Electronics Era. Japanese tanks, with their lack of minimum range, are ideal for this. The best use for Japanese tanks is to use them to defend islands from an oncoming invasion. While your navy and airforce engage the enemy's offshore assets, use your unique vehicles to close in on the beaches and destroy the enemy transports before they land. The lack of minimum range also means that they don't need to retreat to get a better view of the enemy in order to engage.

There is one wonder which Japan should always try to build: the National Redoubt Complex. This large building, in addition to offering added protection and a means of healing your HP-starved troops, also hosts Kamikaze Doctrine, which permanently changes some of your planes and submarines into Kamikaze units. Use this power as well as you can - it can be used either to slow down an enemy if you are trying to wait out a timer, or allow you to finish off an already mortally wounded opponent to win the game.

Hence, it is vital for the Japanese player to combine the Japanese fortifications with their enhanced range with the units of an army. Think of bunkers and fortresses as being "immobile armoured units" which can be used as firebases and field hospitals to support your units in battle. Having your units supported and properly healed is vital to ensure that they will be tip-top condition to proffer resistance that would make even the most heroic of samurai kami quake before them!

So the Japanese way of war is fairly simple enough - use your defences to protect your troops, and try to get a good rush on early in the game, supported by your taxation gains. Once you have taken out your fourth city from the enemy, then you can begin to shore up your defences, resupply your troops and choose either to wait it out with a wonder/territory victory if possible.

Although in real life Formosa was a vital part of the Empire of Japan prior to WW2, the game depicts Formosa as a capital of Nationalist China. This is because of the difficulties expected to arise if Japan were to start off occupying a capital of another nation.

"Gone with the spring / Are young boys like cherry blossoms. / Gone are the blossoms, / Leaving cherry trees only with leaves." - Matome Ugaki, Japanese kamikaze pilot

Retrieved from "https://interbellum.fandom.com/wiki/Empire_of_Japan?oldid=14024"
Community content is available under CC-BY-SA unless otherwise noted.